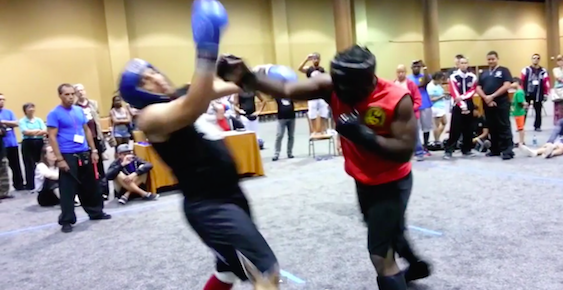 Many lineages differ in style, approach and dogma in Wing Chun. Therefore what I impart in this article may or many not meld with other wing chun practitioners believe or practice.

Wing Chun is an art form that is not getting it’s just due in the martial arts world. Most are enamored at the skilled fighting of Ip Man in the self-titled movies however, the work involved in becoming a well-rounded Wing Chun practitioner takes consistent dedication to the art.

The basis behind Wing Chun is protecting one’s center-line while aggressively attacking with a series of punches (or kicks) towards the opponent. While chain punches seem to be the most famous of Wing Chun’s attacks, our attacks are more than just a flurry of punches. Under my sifu’s instruction, we incorporate upper cuts, hooks, jabs and various other punches while protecting our center-line at the same time.

Although, traditional Wing Chun is primarily a stand up art, it can be susceptible to other arts that train on ground techniques. One thing that we train on and have incorporated in the our curriculum is no gi jiu-jitsu techniques. These techniques involve scenarios on how to fight one’s way to a standing position when being taken to the ground.

We believe and train to stay within the principles and structure of Wing Chun, and that any attack is fair game to use in self-defense and combat scenarios. And personally, I believe these are the same principles set forth by the modern day father of Wing Chun, Ip Man.

Ip Man’s lineage can be traced to the Shaolin temple and the abbess, Ng Mui. This lineage is almost 400 hundred years old and rich in history. Many great masters of the art started as I have and their teachings and skills have for the most part, branched their way to Ip Man. Subsequently, there have been many famous practitioners who’ve trained under Ip Man. Other than his sons, Ip Ching and Ip Chun, other notable students under Ip Man include Wong Shun Leung, Hawkins Cheung, Moy Yat and even Bruce Lee for a period of time.

With any martial art, there are different branches that evolve from the main tree. These branches have the same central idea of self-defense but differ on what techniques are most important to train on a consistent basis. This is the same for Wing Chun.

Our grading system is rather simple and redundant in it’s approach to attain proficiency. This helps weed out any weaknesses one may have. Sifu Och’s curriculum involves planes of development that helps students develop muscle memory and fast reactions in a confrontation. This type of reaction is possible after training consistently for at least a year. Even still, we do not believe in passing for the sake of obtaining a belt. One has to earn it and show consistent progress not on in training but in testing.

The curriculum is comprehensive yet nothing is set in stone. This is because my sifu makes it a point to travel to other masters in Wing Chun for his own personal development. Just recently he trained under Ip Chun in Hong Kong and also continued his training under the Wong Shun Leung lineage with David Peterson in Malaysia.

I have reached the 1st Level Advanced Instructor (red sash) in over 8 years of training. I have been at this level for 2 years and now, under my sifu’s guidance, focus more on teaching the art form as my sifu has taught me.

Even though I am busy with teaching my own students, I do train at least once a week with my sifu. My next level will be my red & black sash, which is a 2nd Level Instructor. Then after that, will be my black sash. And even then, I will continue to train to improve my craft and impart that knowledge to future students of mine.