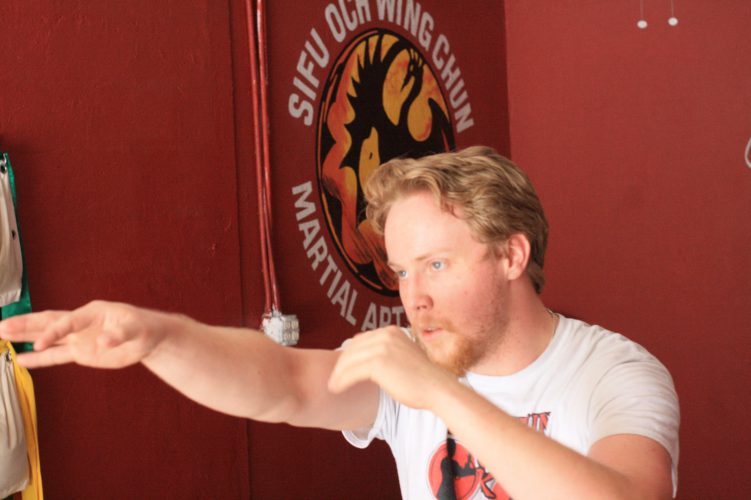 Where to Begin? Where does one begin divulging the effervescent determination surrounding my growth in Sifu Och Wing Chun, but also the growth in myself. ultimately the scrupulous truth would be in my young age of six when I as many martial artist has divulged found my passion for martial arts watching Enter the Dragon featuring Bruce Lee. It was my favorite movie to rewatch and practice the moves of in my mom’s living room. From that moment on I knew I wanted to learn more about Bruce Lee but also learn

more about martial arts. Growing up we didn’t have much extra money so my passion laid with tutorial videos, school wrestling team, and books explaining how to train and learn new moves or techniques. Fast forward to the important part, the year 2009 when the film Ip Man was released in the united states red box system, I was helping my grandpa move when he out of kindness decided to rent a movie for me and my brother. He casually strolls in and I will never forget what he said “you Know you guys have worked real hard and I wanted to show a small gesture of appreciation, I know you both love martial arts so I saw a film on Bruce lee’s master in red box and thought it would be interesting foryou to check out.” Little did I know that night after years of watching, reading, and jumping styles when able I would find my passion. I watched the film and fell in love with the pure flow of combinations, relentless ferocity in each hit and it wasn’t flashy but it was unprecedentedly fast and effective.

I beginwith this prelude only to set the proper background for why I study as hard as I do and why I have such an appreciation for every moment I spend learning something in Sifu Och Wing Chun. In my years of martial Arts fanaticism and study I have trained in my styles of course seeing as I have landed in Sifu Och Wing Chun never were for very long. The complete breakdown would be six months of high school wrestling, a month of Muay Thai, a month of Goju-Ru karate, and Six months of Sport Judo. These many styles that I bounced around in were necessary, they allowed me to gain a proper understanding of what most martial arts schools were about. The schools primarily focused on the money, they would show you a couple moves leave you on your own and then after a bit would ask if you want to join up. This was an industry standard I did not like, so I often parted ways, if I wasn’t sure I maybe stuck around for a bit to maybe see if I was judging to quickly or harshly. I feel that my jumping styles did in fact help me grow as a martial artist however the training only took me so far and let’s be honest it wasn’t very far at all. I still had nervousness in fighting situations or even in confrontational situations.

Sifu Och Wing Chun has and will always be a blessing to me, it’s not simply a school to learn how to defend yourself, for me it’s so much more. To elaborate in greater detail and analysis: it’s a family that helps me when I’m struggling. It’s a support group to help me further grow as a martial artist and it’s also the one place in the world where I feel myself separate from my troubles. however the training only took me so far and let’s be honest it wasn’t very far at all. I still had nervousness in fighting situations or even in confrontational situations.

When I began a little over a year ago I was nervous when entering a physical confrontation however from the moment I joined (Like literally Day One) I was put into wrist vs wrist. This automatic exposure with the accommodations of the further advanced students I could not only overcome the fear but also conquer it. Now I love sparring and wrist vs wrist and when situations outside in my daily life seem to be escalading I don’t worry, I am able to keep a level head. This allows for proper understanding of my surroundings and better problem solving analysis.

Sifu Och Wing Chun also gives realistic defense training, where in other schools I have found what felt like rigid motions that are supposed to at some point just become natural, Sifu Och Wing Chun has offered close quartered and naturally fast movements that take your body no time to understand and implement. It may take years to perfect or tweak to get it in the state you most desire but in the beginning, you already see significant differences. Second I also found a school that talks to each other, where older more intimidating students walk up to the newbies and say hello, give praise while also offering helpful criticism instead of sink or swim. It’s a place where I feel at home, not judged and where only growth is possible, growth of the self, growth of the heart, and growth of body and mind. Nowhere I have crossed paths with has ever come within striking range of what is offered.

All of what I wrote hopefully explains why I love what I do at Sifu Och Wing Chun, why I drive 2 and a half hours for private lessons, tests, classes, and get together, and dream of one day offering a place of Sifu Och Wing Chun where I end up when I become Sifu.